So maybe you read my other Left Coast Crime post about how I got to Reno (barely!!) and you’re wondering what happened at the mystery conference once I got there. Fortunately, there are no non-disclosure agreements with Reno like there are with Las Vegas.

I could use this post to tell you how amazing it was to sleep in a room by myself with no small humans waking me up at all hours of the night but that doesn’t make for an interesting blog post. Besides, I know at least half of you following me are moms who are totally jealous so I won’t dwell on the oh so comfortable bed or the opportunity to wake up on my own schedule and not have to worry about lunch or breakfast for anyone else.

The amazing thing about attending this conference was getting to feel like a legitimate author. This was the first conference I’ve been to where I got to tell people that I would be published in July in a short story anthology. In fact, the program for the conference had this in it: 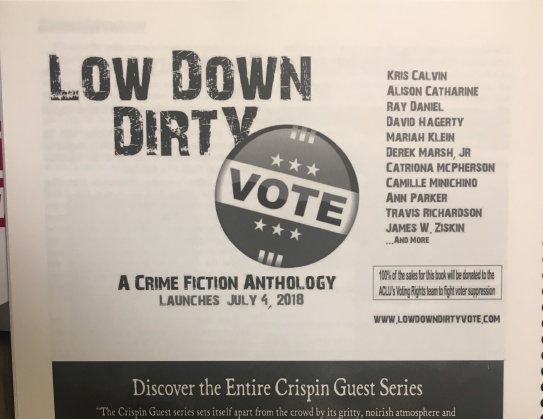 If you squint, you can see my name!

While going to panels was fun, connecting with other authors was the main reason I went. Here is where I will drop names and include links so you can rush to their websites and buy their books should you so desire.

Some authors I knew and loved already, such as Mysti Berry and Gigi Pandian. Some were new to me but I immediately bought their books after meeting them because of how awesome they were in person (Wendell Thomas, Daryl Wood Gerber, Tammy Kaehler, Marla Cooper)

Then there were my Twitter connections. I met Nadine Nettmann at a conference in 2015 (that would be post Kid #2, pre Kid #3 for those keeping track). At the time, she had just gotten an agent for her Sommelier mysteries and now she has three books out. We’ve stayed connected via Twitter and it was fun to see her again in real life. Also, she gave out wine tips as a bonus.

I discovered Kellye Garrett‘s book Hollywood Homicide right before the conference and when I figured out she was going to be there, I tweeted to her about how I enjoyed her book and hoped to meet her. She responded so sweetly both online and in person, and it was pretty awesome to watch her win an award for Best Debut.

Kellye’s book is notable both for its laugh out loud humor and for having a black woman amateur sleuth (of which there are not enough in the mystery world—in case any publishers are reading).

Finally, I have to mention Cynthia Kuhn. Cynthia’s first book, The Semester of Our Discontent, takes place at a university and has the most perfect title ever. Her second book was a nominee for Best Humorous mystery this year.

I wanted to meet Cynthia because I enjoyed her book and because until I read it, I did not know there was a subcategory of the mystery genre called academic mysteries. Since the novel I’m currently working on would fall into that category, I thought maybe Cynthia could give me the secret password to break into the academic mystery world. Although no password was forthcoming, she was super warm and supportive and full of advice and encouragement. 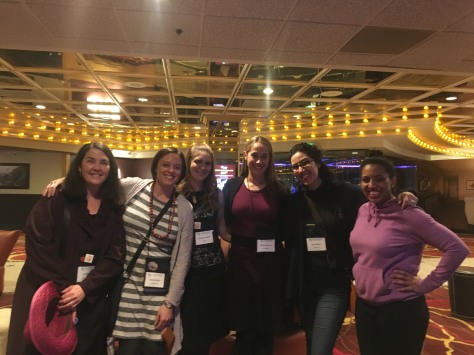 In this photo from left to right: Cynthia Kuhn, me, Kathy Valenti, Nadine Nettmann, Gigi Pandian, and Kellye Garrett.

I left the conference feeling two things: one, trepidation about driving home (but it was actually fine) and two, amazement that the other writers accepted me as one of their own. It felt great and I came back motivated to keep on writing.

Maddee James is the queen and empress of xuni.com, a website design company that creates and maintains author websites. I met Maddee at a workshop for writers and wondered if her career involved much writing. In my quest to be Jessica Fletcher, she who writes and does other things, I requested an interview with Maddee to find out exactly what she does and how she came to do it.

During our conversation, I discovered that like me, Maddee once had babies and needed something she could work on from home. Unlike me, she taught herself how to build websites.

As far as her process goes, Maddee reads her clients’ books and uses a questionnaire to get to know their preferences. Then she applies her own artistic eye to create a website that reflects the author and their work. Her job is much more visual and colorful than writing is, and more collaborative than most novel writing (if you don’t count conversations with the people in your head). Still, both jobs involve bringing ideas to life so that others can appreciate them.

That got me thinking about my own online presence, who I am as an author, and what readers can expect from my work. Like my blog voice, my book voice is female and humorous. My book has an academic setting and takes place in the fall. Unlike me, my protagonist has no children because if she did she would have no time to solve mysteries. The other reason there are no children in my book is that I write a lighter kind of mystery and putting kids in danger is too icky.

Maddee also shared that because she loves her work, she does it almost all the time. It’s hard to turn off or take a vacation. The work/life balance is something I think about because I have responsibilities other than writing, but when the story is flowing, it’s hard to stop. I can imagine a looming deadline would also make it hard to stop. The combination of a looming deadline plus children needing attention, dinner and clean diapers sounds really challenging.

So while I have no plans to teach myself how to design websites anytime soon, I left my conversation with Maddee feeling inspired by her journey and her achievements. And maybe, hopefully, one day I’ll be in need of her services myself.