Low Down Dirty Vote is out in the world and available to readers. My story, Bombs Away, is one of the eleven stories and is my first published work. www.lowdowndirtyvote.com

Readers may be wondering why I chose to step out of my white woman lane and write a black woman protagonist. I usually write white women narrators, fictional characters informed by my own experiences. I believe the world needs stories about people of color, and that those stories are best written by people of color.

So why did I make a different choice for this story?

Reason One: The theme of the anthology is fighting voter suppression. Historically and at present, black people are a major target of voter suppression efforts. Examples are here and here and the Google machine will give you many more. Writing a white character getting their vote suppressed in the modern-day felt disingenuous at best. At worst, it erases the current climate of hostility against black people and other people of color.

Reason Two: Most mysteries/crime stories I like to read and write have a satisfying ending. The bad guy is caught, secrets are revealed, and justice prevails. I wanted to write that kind of story. But…

I didn’t want to write a white savior story. You know the kind. White protagonist swoops in to save people of color from oppression/violence/problems caused by…other white people/white supremacy. This kind of story centers the white protagonist at the expense of the characters of color.

So I wrote a story about Olivia, a black woman who kicks butt and saves the day.

Bombs Away won first prize at the San Mateo County Literary Arts contest, Adult Mystery/Thriller category, and was chosen for inclusion in the Low Down Dirty Vote Anthology. I’m grateful and honored for the recognition, but it doesn’t change the fact that the world needs diverse books written by diverse authors.

Which brings me to the book giveaway. You’re probably thinking I’m going to give away a copy of Low Down Dirty Vote–and I am!—but not today.

Today, I’m offering you the chance to win Hollywood Homicide by Kellye Garrett. This award-winning mystery features Dayna Anderson, who decides to solve a hit-and-run murder for the reward money despite having no investigative experience or skills. This book is hilarious and I know you’ll love it. And it features a black woman protagonist written by a black woman author. 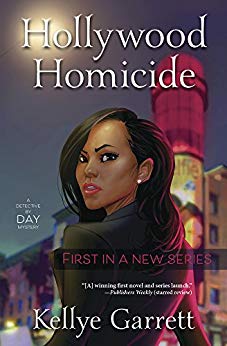 Leave a comment to be entered in the drawing. I’ll select from commenters on August 5, so check back and if you were selected, send me an email to mariah@mariahklein.com. And if you win, but have already read this book, I’ll get you the sequel, Hollywood Ending, set to publish next month!

I was on vacation with the family on July 4th so the day passed rather uneventfully, except for the annual blooming of the hot dog tree. The children were a bit skeptical this year about how a tree could produce hot dogs attached to strings but ultimately decided to keep on believing.

July 4th was notable this year for another reason: the release date for Low Down Dirty Vote, an anthology of short crime fiction edited by Mysti Berry, AKA my first real publication. The book exists in real life, paper and electronic, and people are actually buying it. Even better, all proceeds are donated to the ACLU to fight against voter suppression. 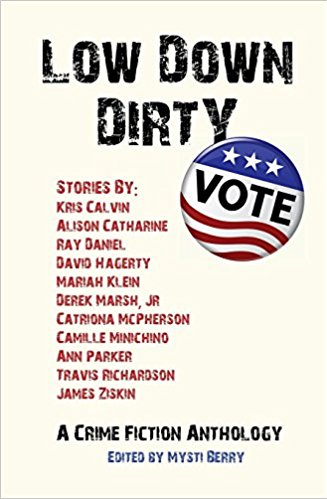 The feeling of holding the book in my hand, seeing my name on the cover, and reading my story right alongside the other accomplished authors, is really exciting. I can now say I’m a published author! Yahoo!

Now to get back to that novel….

Since my last post, I received the news that my short story, Bombs Away, won first place at the San Mateo County Fair Literary Arts contest, Mystery/Thriller Short Story/Adult category. The story is the same one that will be published this summer in Low Down Dirty Vote, a charity anthology to support the ACLU. I’m excited for readers to meet Olivia, community organizer and Black Lives Matter advocate, who takes on a bomb threat at a poll on Election Day.

I’ve also been working on meeting a May 31 deadline for several other projects.

One is a short story submission to the Mystery Writers of America Young Adult Anthology. That story is titled The Prank. It’s been critiqued by two of my beta readers and I’m now making sure it meets the submission requirements.

Contests and anthologies have specific formatting guidelines, and I’d hate for my entry to be disqualified because I didn’t follow them. (Much better to be rejected because my story’s not good enough. Or…wait…)

It’s things like font size, margins, cover page, and even deleting your personal information from the file itself so the entry can truly be evaluated blind.

My other May 31 deadline is a Fantasy Agent submission through Guppies, an online chapter of Sisters In Crime for unpublished authors. The Fantasy Agent is an opportunity to submit the first thirty pages of a novel and a synopsis for evaluation and feedback by a published author. A synopsis is a concise summary of the entire novel. I don’t know how to write a synopsis, but fortunately, Susan Dennard does and explains how here. I’m going to submit one of my previous NaNoWriMo novels.

May 31 is turning out to be good timing since the kids are off school in a couple of weeks and we have some trips planned early in the summer. I’m looking forward to pressing Send on these submissions. Then…to hurry up and wait!